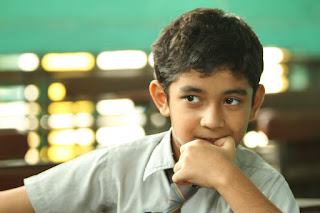 When I sat to write a post on the initiative (write a letter to a ten year old) by Blogadda.com, I thought of some of my students I taught in the last eight years.
Ten year olds are in class five or six.

When I taught class Prep, which is just before class 1, I used to be with my students for 3 hrs everyday. The time-table I was given to follow was like: After assembly a written work (Eng, Hindi or Maths), recess, one more written work and activities like story telling, drawing etc adjusted in between. One day Samarpan (Sam) came to me and told, "Ma'am, after recess and outdoor activities we don't feel like writing, So can we have two 'Writing' periods consecutive and after recess only outdoor and other activities?" He gave me some other genuine suggestions also.

A few years later I was the class teacher of class 3. My class was a mixture of  the kids of ultra rich, rich and neo rich parents. On Teacher's Day one of the parents sent a big cake with a lot of icing and a cherry on the top, which made me shudder as dividing and distributing it among 42 children was a messy job. No matter how affluent the family child comes from is, he would always want the biggest piece and the cherry. While I was drawing imaginary lines on the cake, Nupur, with her cherubic smile came and asked me, "May I ?" and gently took the knife from my hand. First she told everyone to take their seats and patiently cut the cake and called the kids, one by one. She instructed them to pick a paper plate  before coming to her. Within no time my work was done.  Not that two monitors and some other kids  were less capable but they let her do everything, without giving any 'expert's comment'. I wished we grown ups also could learn to run our institutions, state and country so amicably.

In the same class, Jhanvi, a shy new entrant, came to me during recess and told that she was unwell and wanted to go home. I told her to go to infirmary where the nurse  would decide if she could go home. In the fifth period I was shocked to know that Jhanvi was neither in the class nor in the infirmary. Only a fellow teacher would know my plight. I was about to do the needful when Akarsh, a hefty and active child checked Jhanvi's bus number from the attendance register saying this is the time buses ply for primary children, she must have boarded  hers, and ran down from the 3rd floor to the main gate.There he waited for the particular bus among many similar buses. Finally he spotted her. My heart sank when I saw him coming alone to the class. He casually informed me that he had dumped that silly girl into the infirmary. If she would have gone home in the bus that day, the bus conductor would have got the pink slip and  I would have been in a difficult situation.

There are many students who are close to my heart for being intelligent, street smart, with tremendous presence of mind, mature and  my little devils! I have faith and confidence in them. They don't need our preaching. We just have to nurture them with love and care.

@vandy_db absolutely LOVED this post. Make me smile, took me back to my school days, remembered my teachers.

'anonymous' said what i intended to say..cheers friend and wishes always

This generation is infinitely more condfident and smart than ours.

Many times Aryan, out-thinks me as well. And what I read from your experience, this looks like a rule than exception.

@Manish, I can see u enjoying those cute things ur son says or does.Enjoy and don't forget to share.:)